Fear is Another Word For Terror

Fear is Another Word For Terror

"The only thing we have to fear is fear itself," the words of the Democrat saint FDR. Words to inspire hope, in a time of trouble. Reminding the people that there had been worse times in the past, and the nation had overcome. "Nameless, unreasoning, unjustified terror which paralyzes needed efforts to convert retreat into advance" completes the quote. Today, while we live in plenty instead of want, fear is ruling us and ruining us. Fear is paralyzing us into retreating instead of standing boldly.

Freedom's just another word for nothing left to lose (like the great and powerful bard Kris Kristofferson once penned). The left has people petrified into silence and inaction for fear of losing livelihoods. People who have something to lose, like the gainfully employed, fear a pink slip. In today's repressive society, only the unemployed truly have the freedom of speech our founders fought for. The employed cannot speak for fear of being a speaker of hate. This is not a healthy development in our society.

When the sky seems to be falling, and the world appears to be ending, I have been known to quip " Lenny Bruce is not afraid" (hat tip to REM) For weeks I have watched streets burn in "peaceful protest" of so-called "violent words" and wonder if now, perhaps, Lenny would be. Jerry Seinfeld surely is, and who can blame him. He is not alone.

College professors are afraid of free thought and free speech as naked emperors should be. Afraid of losing their hold on the impressionable minds of today's naive students. Their jobs, of course, are safe due to tenure. Their teachings can't stand up to basic scrutiny. The emperor not only is naked, but he also has gangrene. Speaking truth to power is now hate speech, and will be met with all the force they can muster ( speech is violence, violence is now speech, they now say).

The people who demanded we stop using shame as behavior modification because it is demoralizing and hurts self-esteem have now weaponized it. Say goodbye to slut shaming and fat shaming and hello to thought shaming, association shaming, and worst of all, vote shaming. Of all the things that were said to be a threat to our democratic process, vote shaming actually is. It is using peer pressure, financial ruin or threats of violence as intimidation to affect elections, and has potentially a much more chilling effect than "muh Russians". It was so effective in silencing people that much of the media and pundits were shocked on election night. Polls were wrong because people didn't answer, or refused to answer in what they perceived was the wrong way, out of fear of being shamed, or worse.

The methods of shame and intimidation, in this case, didn't achieve the desired result. Instead of crawling off to inspect the damage and create a new game plan, the left has decided that they will double down. They have moved on from intimidation to punishment and revenge. They have ramped up the rhetoric in the media and on campus. Perpetual protests and riots have wearied even the most die-hard conservative non-Trump supporter. They are marching in the streets chanting No Borders, No Nation. That is not a message to win hearts and minds to your cause. They are marching quixotically against the KKK. They are destroying property, starting fires and bashing skulls to fight Nazis, and they get to decide who fits the bill. 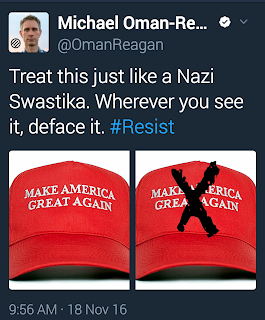 They declared war on "Nazis". "Nazis" are exempt from the due process of law and are ripe for punching. "Nazi" is identified first as white supremacists, then nationalists then alt-right, then right then Trump supporters, then non-Trump supporters that are just tired of them. You don't want to be called a Nazi, do you? Well, you know what you have to do. It will not be good enough to simply not worship their Satan. You must renounce him and all his works at all times. If not they will call you the bad name. They will make sure you never work again. They will call your boss. They will boycott your job. They will threaten you with violence.  They will use fear and shame to control you. They will do all of this to fight fascism, and will never admit to the irony.