Samson, Shaving His Own Head, For the Sake of the Children

Samson, Shaving His Own Head, For the Sake of the Children 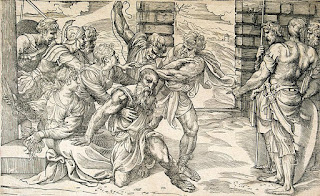 "....How can anyone enter a strong man's house and steal his possessions, unless he first ties up the strong man?"


That verse was tweeted into my timeline yesterday. Now, I didn't check the context in which the tweeter tweeted the tweet, but I was immediately struck by its message. Perhaps the timing had something to do with it, being as it was after the President's weepy announcement of extra-constitutional gun executive orders.

One has to be blind to not see that our President is actively arming the rest of the world while at home he is demanding citizens be disarmed for the sake of the children. Painting anyone who disagrees with restricting gun rights without due process as cold-hearted child killers ( not Planned Parenthood).

"Why do you hate children Mr.Shooty Mc Bangbang?"  "Children have a right to be safe from any and all harm, and your simple ownership of a firearm potentially violates that."  Potentially. Mark that. Potential harm is now actual harm, as are words and thoughts. Arbitrary ideas kill and you will be punished. An inanimate object sitting locked in your gun safe could potentially be used for a bad thing. Why do you want children to suffer, potentially?

Are your hands tied yet?


Lack of gun control equals an abundance of freedom, and therein lies the problem. Lack of control is the issue. Nothing must be left to chance. Time and chance happen to us all, except, of course, in the new Utopia. Can I get an Amen? Nothing left to chance violates free will, and the left is eager to sign it all away.


"Good intentions will always be pleaded for every assumption of authority. It is hardly too strong to say that the Constitution was made to guard the people against the dangers of good intentions. There are men in all ages who mean to govern well, but they mean to govern. They promise to be good masters, but they mean to be masters."  Daniel Webster

They mean to be benevolent shepherds to a herd of passive, grateful domesticated sheep. If that wasn't bad enough, our shepherds want to invite wolves into the fold.

Europe, the glorious example of domesticated citizenry disarmed for their own good, fully is a strong man tied up with the thief as his honored invited guest. American progressives want nothing more than the United States to emulate the European model of gun prohibition and immigration permissiveness. Look to Germany to see how that is working out for them. Progressives love to call even unwanted eye contact from a male, rape, yet are strangely absent from the discussion of how to handle the rape of 60 women in a public setting by over 1000 immigrant men ( referred to as Arab and African by witnesses/victims).

At the moment, a violation on that grand of scale could not happen here. Most, American men would not stand idly by and allow it (yes I have seen men say they would not use violence to stop violence, even rape. They have shaved their own heads bald.) But in Germany, the strong men are tied up. Rotherham, England occurred unimpeded due to the desire of Europeans to not give offense to their guests, and the children suffered, ( Oh,won't someone think of the children!). Rape is preferable to giving offense in a progressive society.

Delilah worked hard for her Philistines, to disarm Samson. Her nagging and pestering failed, only after tiring of her tears, he willingly gave away his secret, and was betrayed for that trust. America's strength is her freedom. It is her individual citizens willing and able to stand and defend themselves against the threat. Crocodile tears should never be enough to persuade us to give up that freedom.