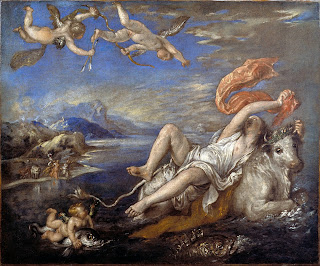 As I mentioned in a previous post, Germany is having a bit of a rape culture problem ( though to be honest, it's a cultural rape problem, but whatevs). The revised number is now up to 150 reported complaints during a 1000 man violent sexual assault rampage. The descriptions of the men were specific and quite problematic for authorities. Seems all of the perpetrators had a belief system in common. Most of them were of Arab or African origin ( as per witness description), some specifically, Syrian refugees, by their own admission. They literally told police that “I am Syrian. You have to treat me kindly. Mrs. Merkel invited me"

Merkel, Time's Person Of the Year, herself, has come out with strong condemnation, of the victims of course, for not taking the proper precautions. While not specifying head to toe coverings and related male escorts when going in public, one can only assume.

Thus, de facto sharia, without even a fight. The strong man is tied, he shaved his own head, and can only watch as his women are raped and sold as chattel.

Here in the Evil Patriarchal bastion USA,  feminists have been decrying words, glances, and thoughts as rape. A man talks to you on campus, rape. If he looks at you, rape. If he thinks you are unattractive and refuses to have sex with you, rapity rape. One can only hope that Merkel can take time from governing/ruining Germany long enough to do a speaking tour of American universities.