You Had Us at Hello

You Had Us at Hello


You Had Us At Hello 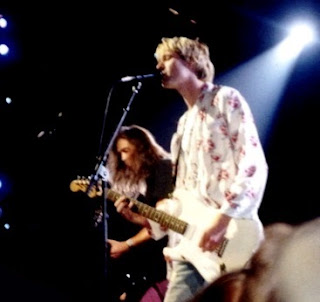 
Thrash metal was scratching the itch that glam could never satisfy. Rap was another venue for expressing angst and becoming quite lucrative, in a way metal was not.


Edgy and cool was listening to classic rock. Boston, Aerosmith, Triumph were the alternative to the Lipsticked Pretty Boys prancing on MTV.


The Purple Rain had become a foggy memory, replaced by a long-haired ginger in a bandana snake dancing to a guitar charmer in a top hat. The class of 90 was made of this. The rose that bloomed with a bang soon also faded in a cold November rain, and there we were.


Our eyes fed upon Alice in Chains. Red Hot chili peppers were trying to get us to put them in us, and some of us were satiated. The rest of us hungered for more spiritual manna in this musical wasteland of pop and rock.

What new thing could we find to listen to in our apathy and malaise? "Here we are now, entertain us."  "Hello hello hello, how low?"  We were suddenly hearing our decade put in words we never could have found on our own, growled and howled over the pounding high school marching band drum beat.

We heard the voice in the wilderness saying come as you are, and we covered in mud soaked in bleach opened our ears and minds and souls to this new sound. We were all ugly here, and it was ok. We lit our candles in a daze because we found our Nirvana.

20 (plus) years later we are back in the wilderness and where is our voice? Married, buried. Weiland could tell you but he is not here either. Layne is truly the man in the box.

Our pop-giant killers were slain in fields of poppies.

Who will be our hero to chase away the twerking, jerking, hordes of circus performers that vie for our attention now? The shallow rivers of saccharine flow from our speakers and earbuds, yet we are starved. A constant repeating parade of boy bands that look like girls singing about girls while naked girls sing about respect and degradation simultaneously.

I do sometimes wish I were that easily amused after all.